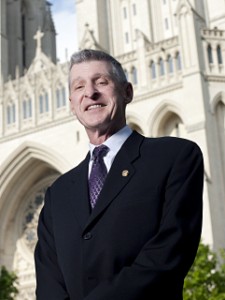 The January 28, 2011 round table discussion between Robert Hess, representing nurse.com and Gannett Education; representatives from AOL Health, WebMD, and Medscape; and Kathleen Sebelius, Secretary of Health & Human Services, is posted at The White House website.

Robert Hess is an educator, editor, author, and consultant. His formal education includes a degree in comparative religion from Temple University, a nursing diploma from Frankford Hospital in Philadelphia, a master’s degree in nursing administration from Seton Hall University, and a doctorate in nursing from the University of Pennsylvania School of Nursing, where he studied organizational theory at the Wharton School. His research involves the development of the only current valid and reliable instruments that measure governance by professionals and the effectiveness of shared governance councils in healthcare organizations. Both nationally and internationally, researchers, consultants, and administrators have used these instruments to assess, implement, and evaluate shared governance programs and to pursue Magnet status in several hundred hospitals and healthcare systems. These instruments have been translated into about 10 languages. In 2005, he created the Forum for Shared Governance and its website to meet the needs of staff nurses, administrators, and researchers who are involved in the implementation and evaluation of shared governance models.

An award-winning author, Dr. Hess has written more than 100 articles for numerous journals and books. As an editor, he has been personally responsible for coaching more than 500 healthcare professionals to publish their first articles. Dr. Hess has been a distinguished lecturer and writer for Sigma Theta Tau, International, nursing’s honor society, and he is a past recipient of several awards from Seton Hall University, the New Jersey State Nurses Association, and the prestigious NJ Governor’s Merit for Excellence Award as educator of the year. In November, 2008, he was inducted as a fellow into the American Academy of Nursing for his work in shared governance.

Dr. Hess serves on numerous boards and committees. He is a trustee on the Foundation of the National Student Nurses Association; every year for 16 years he has spoken at NSNA’s national convention to a full-house of students about the nursing job market and career fitness. He is the past chair and advisor to the Development Committee (personal fundraising) for the American Academy of Nursing, and a past director on the national board for the American Association for Men in Nursing.

As a speaker and researcher, Dr. Hess has been described as unflappable, focused, outspoken, and even “refreshing.” He is the present . Founder and blogger for CareerWhisperer.org and past career blogger for Nurse.com.

Dr. Hess retired at the end of 2018 from his day job as executive vice president, chief clinical executive, for Relias (formerly Nursing Spectrum/Nurseweek, Gannett Education, OnCourse Learning), which publishes Nurse.com and ContinuingEducation.com. He led the largest CE providership in nursing and the first-ever winner of the American Nurses Credentialing Center’s Accreditation Premier Program Award, 2007, which was awarded twice again, spanning 2009-2015. Capping his work as a commissioner and appraiser, he was the vice chair of ANCC’s Commission on Accreditation.

Dr. Hess and his team were responsible for the development of continuing education for nurses, physicians, pharmacists and about 21 other healthcare disciplines through podcasts, webinars, live seminars, career fairs and through the most trafficked websites in nursing, including www.nurse.com, visited frequently by healthcare professionals from such far-flung places as Madrid, Athens, Tokyo, Sydney, and Samoa. His provider units awarded about five million contact hours in 2017. In addition to www.continuingeducation.com, CE was provided through www.todayinpt.com and www.todayinot.com.