Born in Lisbon, Portugal, Dr. David Silva came to the US in the late 1990s. After earning his Bachelor of Science in Nursing from Linfield College in 2004, he received an internship position at Oregon Health & Science University (OHSU) in early 2005, which set the stage for a staff nurse position at its Portland campus. He’s been at OHSU ever since — first as clinical team leader and staff nurse in the inpatient surgical unit and, since late 2012, a nurse manager in ambulatory surgery. Additionally, he holds a Master of Nursing and a Doctor of Nursing Practice (DNP) degree from OHSU.

In broadening his education, David always wanted to be challenged more. Where his Bachelor’s gave him the basics of nursing, his Master’s further expanded his knowledge of health systems and organizational leadership complexities. David’s DNP research focused on augmenting the positive core attributes of a top performer interprofessional shared governance by which governance groups wishing to evolve towards professional governance could apply lessons learned into current structures and processes.

David believes nurses’ voices to be a powerful catalyst for change and a critical step in improving patient outcomes in complex healthcare systems, particularly when nurses exercise their autonomy and professional obligation to the full extent via strong interprofessional relationships. 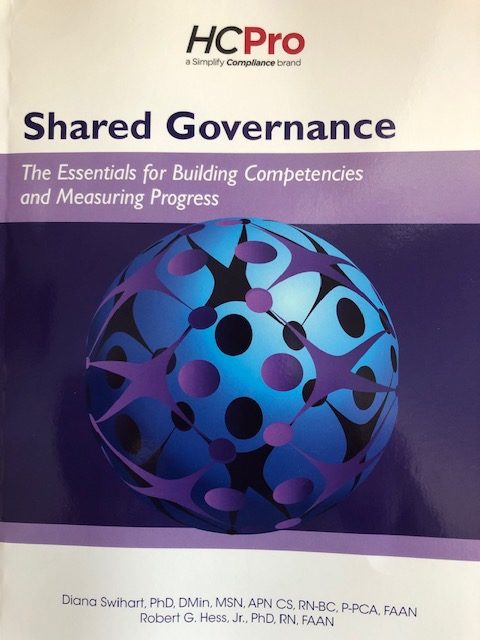 Shared Governance, Fourth Edition: A Practical Approach to Transforming Interprofessional Healthcare Diana Swihart, PhD, APN CS, RN-BC, FAAN Robert G. Hess, Jr, PhD, RN, FAAN The ONLY CURRENT book on SG! One nurse educator reports, "We are in the process of creating shared governance here, and your book has become our resource for every phase. Thank you for all your have done to empower nurses." Click here to order now Be sure to use the discount code, GOVERNANCE, to receive a 15% discount!